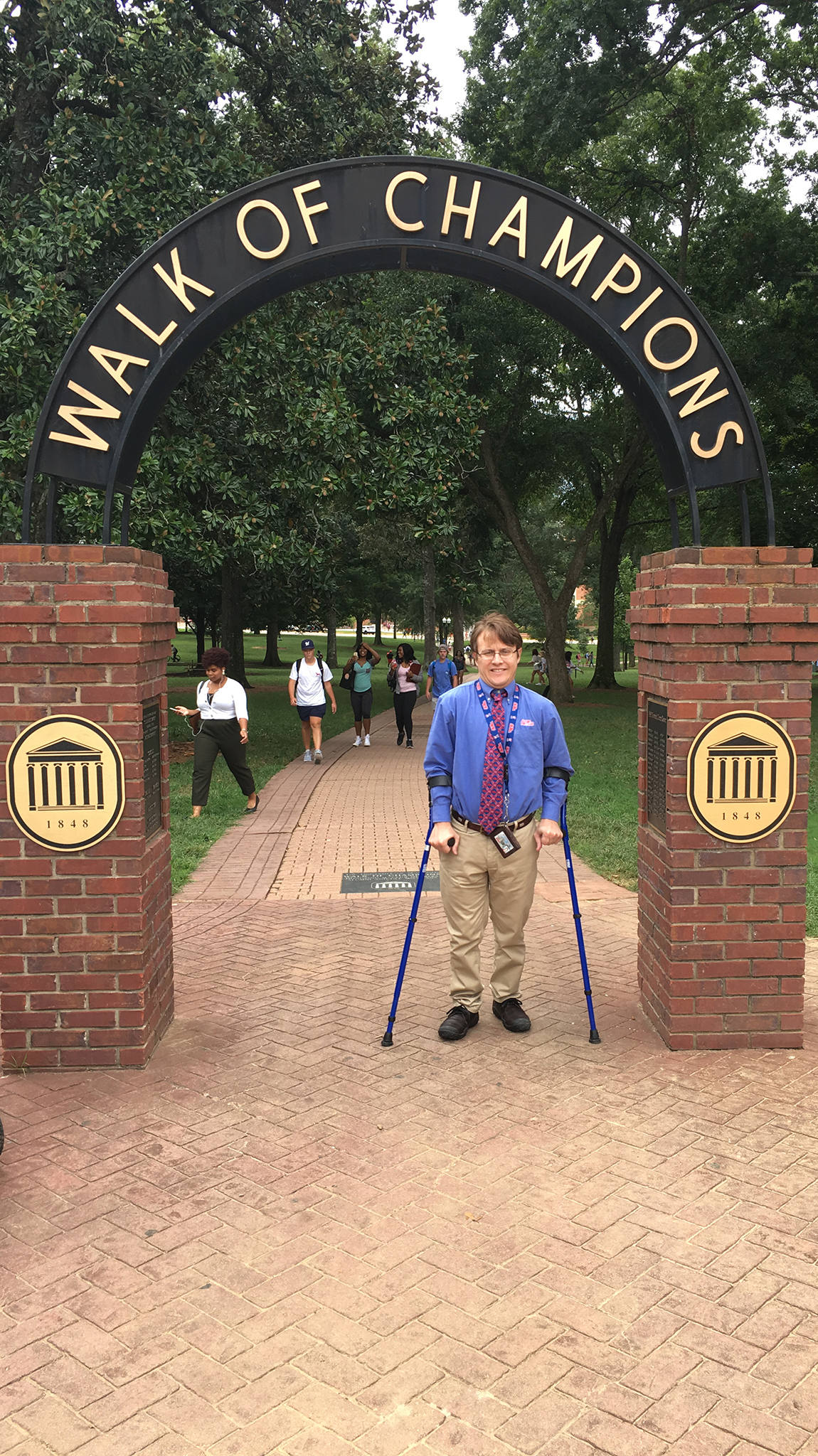 September 20, 2016 By Christina Steube of University of Mississippi News
OXFORD, Miss. – University of Mississippi senior P.J. Sheffield has not missed an Ole Miss football or baseball game in seven years. He’s been to every home basketball game for five years, and every fall Friday for the last 12 years, he has been on the sidelines at Saltillo High School’s football games.

A general studies major who has minors in history, psychology and journalism, Sheffield works out every day during the summer and goes for daily walks in the Grove during the school year, while sometimes taking a course load totaling 21 hours.

Sheffield was born with cerebral palsy, which has been more of a minor inconvenience for him than a definitive identification of who he is as a person.

Cerebral palsy is a neurological disorder that affects muscle movement and posture. When Sheffield was 5, he underwent surgery on his hamstrings to allow him more movement and the ability to sit up. Since then, he’s been unstoppable.

“I visit wellness centers and do upper body exercises all the time,” he said. “Anything that any other person can do, I can do; it just may be in a different way that takes me a little longer. It’s amazing how you can train your body to be super-strong from the waist up.”

Sheffield describes himself as a self-driven person and deciding what to do after high school was simple.

“It was either go to college or nothing,” he said.

He earned his associate’s degree in general studies in 2013 from Itawamba Community College and knew Ole Miss would be his next stop.

“It was home. I didn’t want to go anywhere else.”

During his time in Oxford, Student Disability Services has assisted him in any way he’s needed: by contacting notetakers, allowing him to record lectures and allowing him extra time on tests, if needed, although he moves through much of his coursework just like any other student.

“I have had no problems with inclusion on the Ole Miss campus,” he said. “SDS has made my college career as accessible as possible and have let me know they are there to help if I need it.”

Sheffield said the “Allies for Inclusion: Ability Exhibit” hosted by SDS this week at the Inn at Ole Miss is a great way for faculty and other students to become allies for students with disabilities.

“I think when they see the drive, it makes them want to be even more inclusive,” he said. “I think they see it as motivation for themselves.”

His condition hasn’t changed since he was a child, and he tries to stay as active as possible to keep the continued use of his muscles.

And, upon the completion of his degree in May, Sheffield will have achieved all his goals at Ole Miss. After college, he hopes to pursue a career in sports by either coaching his former high school football team or becoming a sports journalist.

“He’s very positive and he’s got the brightest outlook of anyone I’ve ever met,” Byrd said. “If he puts his mind to it, there’s not anything he can’t do.”

Sheffield’s love of the game will create a career path for him, Byrd said.

“If I push myself, there’s no stopping me,” Sheffield said. “If you want me to do something, put it in front of me and I’ll figure out a way.”

Thank you for being a friend! ... See MoreSee Less